For the past school year, Notre Dame students have been calling for a pornography filter on university-provided Wi-Fi. The petition for the filter has now been signed by over 2,000 members of the Notre Dame community.

In January of this year, Students for Child-Oriented Policy (SCOP), the group leading the effort, requested a meeting with Notre Dame’s President, Father John Jenkins. At the meeting on February 5, 2019, SCOP members presented their argument for a pornography filter, their policy proposal, and the technological steps for implementation.

Father Jenkins explained he would work towards implementing an “opt-in” system. In this model, students could voluntarily sign up to have their Notre Dame Wi-Fi filtered. Father Jenkins stated that Notre Dame’s Campus Ministry and Gender Relations Center would also raise awareness about pornography usage.

Students for Child-Oriented Policy sent a letter on February 17 to Father Jenkins explaining why they could not support the “opt-in” filter. The group stated:

An opt-in filter is not consonant with the current university policy against pornography consumption, which recognizes the moral truth that the human person should not be degraded as an object of sexual fantasy. This dissonance with University policy would create a situation in which it appears the ban on using University resources to access pornography is null and void. An opt-in filter would tell students that if they wish to useUniversity of Notre Dame resources to access pornography, they are free to do so.

An “opt-in” filter would teach that degrading others, especially women, is a matter of individual choice. It would say to students, “If you choose to go the extra mile to respect women, we support you.” It also teaches students that “if you wish to degrade women,we will facilitate that too. The choice is yours.” An opt-in filter would create the default option of offering the University’s servers to be used to drive demand for an industry that abuses women and children, and fosters an environment amenable to sexual assault.

Father Jenkins sent a letter to the organization Enough is Enough on March 7 stating: “Although we do not believe a mandatory filter is the best solution for us, we are taking steps to encourage students and others to adopt filters voluntarily. Thank you for your thoughts on this matter.”

SCOP President Jim Martinson recently published a response and said of the University’s decision, “We are disheartened to see that Father Jenkins has rejected the call of thousands of members of the Notre Dame family to adopt a pornography filter on a Catholic University’s campus. We hope that Father Jenkins will reconsider his decision for the sake of promoting a campus culture that upholds human dignity and respect for women.”

SCOP Vice President Ellie Gardey stated, “The administration has decided to provide a free flow of pornographic material on Notre Dame’s Wi-Fi network. Pornography propagates sexual assault, contributes to the objectification of women, and advances the sexual exploitation of children. I call on Notre Dame to instead stand as a champion for women and children by enforcing the University’s official policy against using pornography on Notre Dame Wi-Fi network.”

SCOP Policy and Advocacy Commissioner Veronica Maska said, “Our Lady’s University has long placed human dignity at the core of its decisions and community guidelines. We are disappointed that Notre Dame has chosen not to enforce its own current policy prohibiting the consumption of pornography with university resources as is laid out in the student handbook. We hope the University will reconsider and take a firm stance of ethical leadership.”

Past Coverage by Nightline ABC, The Daily Beast, National Review

Read the men’s request for a filter here.

Read the women’s request for a filter here. 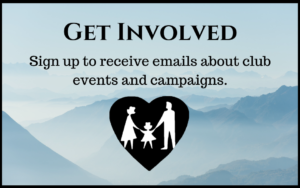 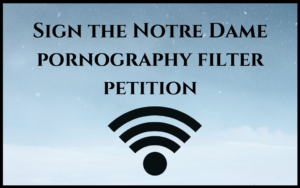